This outward turn is natural, and it’s a sign of the degree to which fear dominates education that we so often attempt to legislate it through assignments, deadlines, and the like. Rather than trust that having learned something, we will want to share it with our peers, we force ourselves to do this sharing through the implementation of both strictures and a deadline; and rather than trust in our natural capacities for giving—and in the fact that giving feels good—we legislate this, too, through requirements like community service hours—then, in adulthood, through incentives like tax relief—and so forth. At pretty much every juncture, we cast doubt on our own natural tendency toward altruism and external orientation, instead suggesting that we are fearful, selfish creatures who must be forced to behave in these ways.

When I first began experimenting with my processes of reading literature, I still found myself very much subservient to the ‘accountability’ paradigm, and finished off this process by demanding that I ‘do’ something in the external world through a form of challenge. For instance, after finishing constructing my psychic map and writing my executive summary on Hamlet I challenged myself to share this knowledge with the world by the end of the following month, a timeline which I then met by appealing to friends for an audience, venue, and for help promoting the event.

Similarly, after finishing my work on Pride and Prejudice I challenged myself to share my knowledge from that work of fiction through the venue of a community story-telling event, and appealed to a friend who runs such events and asked him if I could lead one. 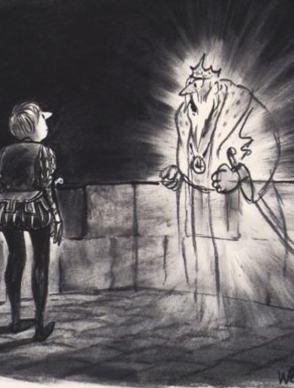 Both events went well: in my event on Hamlet, what I did was construct an exercise on fatherhood that would help participants to identify what they felt they needed, but had failed to receive from their fathers, then articulate how they could begin to give themselves these things instead. For me the process of reading Hamlet had brought to mind many situations with my own father, as well as the imperative for me, like Hamlet, to move past the ‘ghost’ of my father and to begin to father myself, and this was the knowledge I sought to share with others through the event, through the form of an activity that brought home the knowledge.

With Pride and Prejudice, the essential learning for me had been that I’d sabotaged my own relationships through a fear about what relationships ‘meant’ or ‘didn’t mean,’ and that health in relationship probably resembled just pursuing pleasure in the deepest sense, and I tried to communicate this knowledge through hosting a dialogue in which I allowed participants to interrogate a painful interaction with a partner in a relationship, inquire into what unexpressed needs their partner might have been acting from in that moment, and articulate what they themselves would have done differently had they known about these needs. Through this process, I intended to help people see that relationship needn’t be so difficult.

What was interesting about both events, however, was that they didn’t go as planned, and what was more interesting was that my jiving with these unexpected circumstances seemed essential to the events’ ultimate success. In the event on Hamlet, for instance, only a few participants showed up, and rather than try to rigidly walk them through the process I’d outlined, I stepped in and more conversationally proceeded through the exercise with each person individually, which created a more fruitful outcome for all. Similarly, in the event on Pride and Prejudice I could see that what the group of people who’d showed up really wanted was an open space to dialogue with one another about relationships, and so I abandoned my outlined activity altogether, instead letting people converse freely, discover themselves, and articulate new principles for being in an organic way.

In effect, what happened with both events was that the event itself took control of the outcome rather than my controlling it, and this happened because, in a moment, I realized that I had become confident enough about the topic that I didn’t need the event to ‘prove’ anything to me.

This, I learned, is the unexpected lesson of community mapping, and our final learning in our process of reading literature: when we have learned something about ourselves and our lives through this process, that knowledge is integral—which is to say, whole and self-contained—and this means that we no longer need anyone outside ourselves to ‘verify’ it or to ‘give’ anything back to us for having learned it. This stands in total contrast to the system of education, where we are constantly trained to seek approval for having learned things from people other than ourselves. In the process of community mapping, what we find is that having truly learned something, we no longer care about verification or approval, and from this place we can begin to provide what our community needs without expectation, and without requiring anything in return.

From this latter realization my community mapping began to undertake a whole new form upon finishing a work of literature, which I would liken more to an organic response or attraction. For instance, shortly after I had finished my work on Pride and Prejudice and run the event above a friend contacted me about trouble she was having in her relationship, wanting to talk about it, and she and I went to a park and sat on a bench while she recounted the trouble. What I later realized is that the knowledge I’d gained about my own life and relationships from reading Pride and Prejudice in an engaged manner made me a suitable candidate for this conciliation; even though I hadn’t had a relationship as long or as committed as the one my friend was negotiating, the work with Pride and Prejudice had cultivated an inner knowing in me that she somehow sensed, or felt, and this attracted her to me such that she could share about her own relationship and together we could begin to unpack the situation.

In this paradigm I ceased to give myself ‘challenges’ upon completing my engaged reading of a work of literature, instead trusting that I would be called where I was meant to go, and do and share what I was meant to do and share. Instead of manufacture opportunities for myself to actualize my knowledge, I began to find them in myriad small, organic ways, in one on one conversations with friends, peers, and even strangers, or in opportunities that arose seemingly without my seeking them out. This is why I call this experience ‘attraction,’ and why it so radically differs from the systems of accountability and management to which we subject ourselves in education: through reading literature, we form knowledge about ourselves and our lives in our hearts and our souls, and this knowledge draws to us experiences which we would neither have seen nor have seized previously, ones which always manage to stand right at the edge of our capacity and learning.

In the end, responding to life in this organic fashion resembles what, at the outset of our process of reading literature, we found ourselves unable to do: step off the balcony and into the field that is life, becoming a character in a journey and no longer worrying so much about what it all means. Rather than preemptively try to manage or control our input and outtake, we simply are, and in this way, we resemble the very characters about whom we have read—and into whom we have read ourselves—we display our beliefs through our practice, opening ourselves up to being read by others in ways that are informative and transformative for them, too. And if they conclude things about us that we wouldn’t like through reading us in this way, ah, well… This is nothing we can control, and once we’ve learned about ourselves in a way that is truly liberating, nothing we care about, either.

For me, community mapping completes our process of reading literature such that we shift from reflecting on and internalizing characters’ lives into the context of our own, to actualizing this knowledge in the world at large, and ultimately this process brings us to a focus on being that is at once spiritual, vital, and deeply liberating. Community mapping can begin with a challenge to ourselves to share, to actualize the knowledge which we have gained through the previous steps of reading literature, but it need not necessarily do so: it can also begin with an inner impulsion to share with a friend or explore a region; or even, more subtly, it can blend in with reading and reflection such that the original distinction between being ‘on the balcony’ versus ‘on the field’ disappears altogether.

How have you chosen to share with your community at large the knowledge which you have gained about yourself and your life, your story, and in so doing, how have you transformed that community—or at least attempted to? In what ways have you liberated yourself from the feeling of being trapped on a balcony rather than standing on a field, watching your own life? In what ways would you still like to challenge yourself to liberate yourself from this feeling? There are always further reaches to be explored in our endless, breathless coming into the world, and in this regard literature is a tool that will never let us down.