My whole life I’ve been distrustful of doctors. I don’t know what it is. The coldness of the waiting room, the feeling of paranoia amongst the people waiting. The feeling of being analyzed when seen by the doctor, as though the exchange is a one-way street. In me, the childhood fear of needles has never really died.

When I was twenty-three, I had to get a yellow fever vaccination in order to be authorized to teach English abroad. Prior to getting the vaccine, I asked the doctor whether there were any known side effects, anything I might anticipate experiencing. She simply said “no.”

About an hour later, I was seated at a coffee shop when suddenly I began to feel woozy, nauseous, and fatigued. I felt I had a fever. I rushed to the bathroom in case I threw up, and there, I nearly passed out.

After a family member had picked me up and brought me home, I looked up the vaccine online, and sure enough, everything I’d experienced was listed under common side effects. In fact, these side effects were experienced by as many as fifty percent of vaccine recipients!! Why hadn’t the doctor told me this? Was she lying, or did she simply not know?

About six months earlier, I had been suffering from extreme anxiety in light of having sent off a round of doctoral applications and not having much else of a plan for my future. In my first year out of undergraduate, I wasn’t sure what to do with myself, and if I didn’t get into graduate school, I feared that my life was essentially over.

In this state, I developed a breathing condition and, coupled with the anxiety, a fear that I had late-onset asthma. I visited a doctor who corroborated my diagnosis: she prescribed an inhaler and told me that asthma, like schizophrenia, can sometimes arise in the early twenties.

Except that I didn’t have asthma, and don’t. As noted above, I was anxious about my graduate school applications. Quite literally, I was freaking myself out. Why couldn’t my doctor discern this from her interaction with me? Did she know that I might simply be anxious, but ignore this in order to prescribe the medication?

I bring all this up because, in the past few months since the onset of Covid, I have been revisiting and reflecting upon my experiences with and attitudes toward health. Since the death of George Floyd, I have coupled these reflections with inquiry into my lifelong rearing in a racist society, and in the past week, it has clicked for me that there is a little-noted similarity between the two: with both doctors and racism, heterodox truths are dismissed; with both phenomena, arrogance and what we think of as the patriarchy rear their heads.

For these reasons, I want to examine a popular hashtag associated with present-day, U.S. liberalism, which is #scienceisreal. I want to examine this alongside another such popular hashtag, #believewomen. Wielding the similar dynamics among the medical industry and racism, I want to suggest that there is a conflict here: we cannot cleanly believe that #scienceisreal, and at the same time #believewomen. I want to do all this in our current moment of nationwide Black Lives Matter protesting because I believe that a unification among movements is possible, albeit counterintuitive.

What are the parallels between the medical industry and racism? 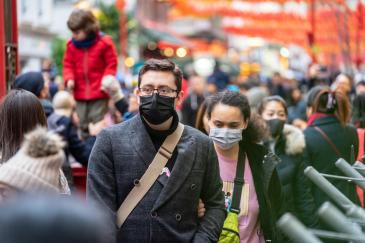 Shortly after George Floyd’s death, I reflected here and on my FB wall that, in my opinion, the quarantine has given many white people a window onto the experience that U.S. people of color have had for centuries. Specifically, we cannot go outside without fearing for our lives; moreover, we are barred from gathering in large groups and feel that our identities are erased. For me personally, the resonance goes even further: as someone skeptical of doctors, I am and always have been drawn to alternative healing modalities, and if I voice these I am often excoriated as a pariah: I am told that I am crazy, that the people whose research I have been reading are crazy, dangerous; this is akin to the way in which, expressing their experiences of racism, non-white peoples are often told that the data do not support their claims, that the experience is all in their heads. (It should be noted here, the same could be said of queer people’s experiences, women’s experiences, etc; this phenomenon is one experienced by any nondominant group when it comes to sussing out truths.)

What is the result of this dynamic in aggregate? Simply put, people of color cease speaking to white people, in much the same way as holistic and alternative medical practitioners, vaccine skeptics, and the like cease engaging with the orthodox medical community. A lack of trust and exhaustion are manifested, and communities break apart.

Before going on to talk about how and why there is a conflict between the hashtags #scienceisreal and #believewomen, I want to provide some evidence that there is something fishy going on with the U.S. pharmaceutical industry. Or at least, that there could be. Data point 1: big pharma spends twice as much as the fourth leading industry in governmental lobbying, and that fourth leading industry is oil and gas. When it comes to oil and gas, liberals are happy to suggest that climate skepticism arises from the industry’s well-targeted misinformation campaigns; that is, it is the oil and gas industry’s outsize influence that accounts for the presence of disbelievers. Taking that same logic, shouldn’t we question whether the pharmaceutical industry accounts for pro vaccine rhetoric? After all, the industry is also highly and uniquely dominant when it comes to television advertising.

My point here is not that vaccines are harmful, that we should not be in the practice of taking medicine, etc. Rather, my point is that given the responsible party’s outsize influence, we should at least be skeptical that we can really know what we think we know. It is like if I give you a library, but remove half the books. Do you truly have access to free information?

As a data point 2 along this same vein, Michelle Obama reportedly wanted her White House initiative to be healthy eating, but pivoted to exercise due to successful lobbying on the part of the food and beverage industries. Similarly, Bill Clinton is reported to have refused to take on sugar during his administration due to the Coca-Cola company’s backing. If even people at this level of power are constrained in their views, how can we be sure of what we think we know?

Now to the similarity between racism and the medical industry: doctors wear white coats, while the KKK wears white hoods. In a sense, both are wizards, persuading themselves and others of hierarchies unfounded in reality. From the KKK Klansman, I learn to believe in my inferiority; from the doctor wearing the white coat, I learn to distrust my feelings, community, and to reify the doctor’s own knowledge. If this comparison sounds gross, then recall that racism and the medical industry met in the infamous Tuskegee experiment, in which black men were unknowingly diagnosed with and never treated for syphilis by the U.S. government. And if that strikes as something egregious relegated to the past, know that European doctors have recently discussed using Africa as the same kind of scientific playground.

Furthermore, consider that what is meant by “science” in the phrase #scienceisreal is the science of a particular culture, notably the white, European culture of men like Isaac Newton, Francis Bacon, and Albert Einstein. As the previous sentence already suggests, it is furthermore the science of white, European men, men who sought to brand anything outside their culture as “crazy,” “irrational,” “primitive,” or “stupid.” This included the words of women, some of whom were witches, mystics, and gypsies. That is why these women’s truths were called “wives’ tales,” a put-down that lives on in the branding of all that is non-scientific as “anecdotal.” For anecdotal, consider as a parallel oral storytelling, and all that has been crushed in the white, European promotion of “his-story.” Whose ways of seeing matter and are believed? Whose get branded as “anecdotal”? Why?

If this sounds like something unique to the medical industry, know also that it has happened in education: there is an excellent book called Subject to Fiction: Women Teachers’ Life History Narratives and the Cultural Politics of Resistance that covers how women teachers were convinced to distrust the intuition they used to teach; from this point, we got what is known as the “professionalization” of teaching with all its associated standards.

Am I suggesting that we abandon the field of science altogether? No. I am simply suggesting that the field is and always has been poisoned by the same misjudgement as racism: arrogance, the view that one’s own kind is somehow superior to others. And arrogance, of course, stems from insecurity—it is the belief that I might be wrong, therefore I must hide myself in a shroud of “objectivity.” Thus the clipboard, spectacles, and white coat arrive.

What is the solution? Simply speaking, vulnerability and humility.

In my writing, I have always tried to center my own experience and to speak from the heart. That is because in academia as in science generally, I have been taught to shroud my view; I have been taught to hide behind “evidence” that is impersonal, that obviates the need to be vulnerable by resting on the laurels of someone else’s authority.

With humility and vulnerability, we avoid the kinds of breakdowns of community delineated above, the skepticism, gaslighting, and secret societies. In the case of the doctor who either lied to me about side effects or didn’t know them, we take our patients’ concerns seriously; in the case of the doctor who misdiagnosed me as asthmatic, we pay attention to emotional and narrative as well as technical cues. Similarly, in the case of racism, even where the “data” do not seem to support our friend of color’s experience, we listen. Through these techniques, we come together as a people and erase hierarchies of truth.

In my belief system, we are points of attention in a unified field of energy. Through this field, memes of thought and emotion pass; in this way, a person like me who experiences anger at being gaslit by the medical industry is no different from a person who experiences anger at feeling gaslit on the topic of race; the anger is what unites us, the distrust and intolerance for unearned power. Even more largely, the skeptic of the “deep state” and the warrior against the economic elite can be on the same team; both share an energetic and psychic dynamic if not a tangible, superficial policy platform. Ultimately, all are vectors of experience bewildered by the all.

In closing, I would like to propose an alternative to #scienceisreal: #scienceisausefultool. No more, no less; just like anything else.

1 thought on “An unlikely union”